The Impact of COVID-19 on College Admissions at Hammond 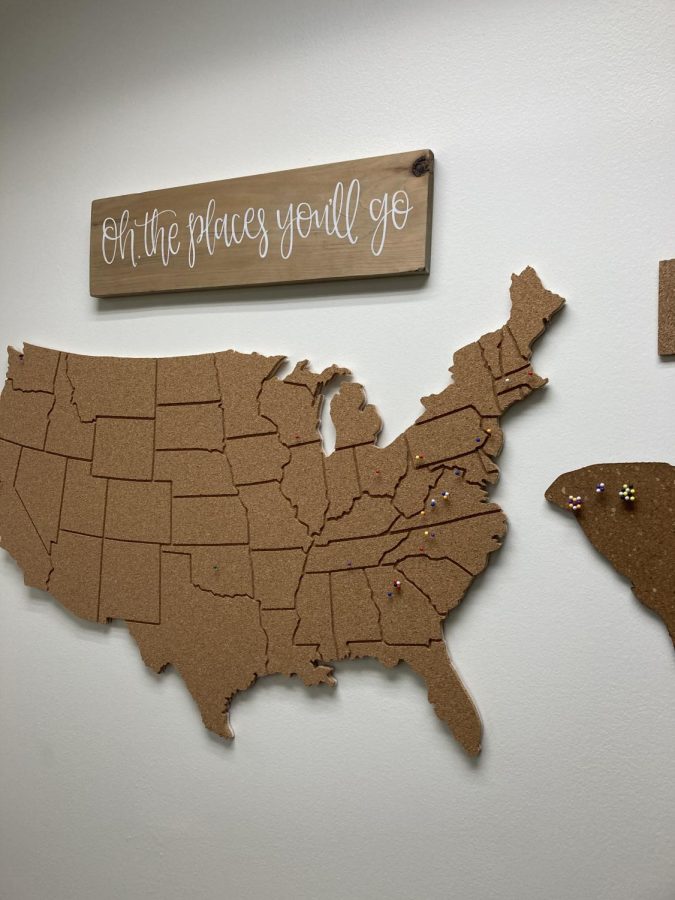 Mrs. Daniels' college board awaits the decisions of the class of 2021.

Like many aspects of Hammond life, the college admissions process has been forced to adapt to changes brought on by the COVID-19 pandemic, which caused the school to close for the spring semester back in March of 2020. Hammond has transitioned back to full-time on-campus learning since the start of the 2020-2021 school year, but beyond the Hammond campus, colleges across America have been forced to make pandemic-friendly adjustments. The College Counseling office has responded accordingly in order to allow the college search and application process to continue with some semblance of normalcy for Hammond upperclassmen.

“I would say the number one biggest area of change has been with [standardized] testing,” said Kathryn Daniels, one of two college counselors in the College Counseling office. “As the pandemic kind of came to America, it stopped all standardized testing opportunities…thousands of colleges have gone test-optional this year, and it’s interesting to see how some are doing a one-year test optional program, some are doing a three-to-five-year trial period [to]  see if they want to do it forever, and others have just committed to being test-optional forever. And so I think that’s the biggest change for this year, and it may be the biggest change moving forward.”

Mrs. Daniels was also optimistic that the new test-optional approach of many colleges would bring about more holistic admissions in the future, which she fully supports. “Our philosophy in our office is that test scores are great when they are good for a student, and the student feels like they represent their academic ability,” said Mrs. Daniels, “but that the student should have the choice to make that decision themselves. And so if [test-optional admission and holistic application review] continues, and we’re hopeful that it will, that would be a positive.”

Mrs. Daniels also commented on the changes this year in students’ search processes. “For students who traditionally would have visited colleges in person, [this] was a big change,” she said. “We saw a lot of seniors last year who were a little bit stressed because they hadn’t been able to visit all of their options.”

The change in college tour options has become a setback in the selection process for several members of the 2020-2021 graduating class. “I’ve been trying to go visit [colleges],” said Milly Johnson, a Hammond senior who has finished submitting her applications. “But all the visiting groups max out. So I would’ve visited them by now, but since COVID, it’s harder to book a time.”

Those students who toured their favorite schools before the pandemic began have found that it makes major choices slightly easier. Georgia Berry, a Hammond senior who applied Early Decision, said of her choice, “[I didn’t have difficulty] deciding which school to go to, because I’ve known for a while. But I’m glad that I toured the schools that I toured before the pandemic. Because I feel like if I didn’t, then I wouldn’t be able to necessarily know if I wanted to go there or not, or if I wanted to apply.”

“I haven’t been able to visit,” said Doga Ozmen, a senior in the middle of her college application process, “But for me, that’s not as big a deal as other people, because the colleges I’m applying to are pretty far away from here, so…I would not have been able to visit most of them anyway.”

Of the ranks of students who have yet to tour campuses, many are underclassmen, who will likely also experience some complications in their college admissions processes in the years to come. “I don’t think tours will be the same,” said Walker Williams, a Hammond sophomore. “You’ll have to have more boundaries and guidelines.”

Mrs. Daniels also commented on changes in the admissions process for underclassmen. “There will be long-term impacts,” she said, “Colleges are going to have to take into account that, okay, maybe this year’s seniors have a spring semester term that was weird in terms of academics, but next year’s seniors have a spring term [that was weird], too, just from their sophomore year. And that could be…four years of impact.”

The pandemic has also led to an increased dependence on technology. Zoom calls have allowed College Counseling to connect with representatives from across the country. In addition, increased email exchanges between students and counselors has limited the exchange of hard-copy essays. “It’s almost all via email,” said Berry, “and that can be tricky. Because the internet can be down in places…some people don’t check their emails, and sometimes it would just be easier to go in and have meetings.”

Mrs. Daniels also acknowledged the changes. “Before this year, everything was paper,” she said, “And so [the pandemic] did kind of force us into the 21st century in some ways, because we said, okay, we need to start doing some things electronically to minimize the passing back and forth of things…but using Naviance and other online tools, we’ve done that for a long time…I think it’s made colleges be much more creative, because they’ve had to offer virtual opportunities, and they’ve had to figure out how to offer these great experiences in virtual and online platforms.”

When asked to remark on the difficulty of applying to college in the midst of a global pandemic, students had differing perspectives. When discussing several schools’ choice to go test-optional, Doga Ozmen remarked, “[It is] a relief to me. …I mean, I still feel pressure, but [there’s] a little bit less.” Other students, however, believed that overall, the pandemic heightened the anxiety of what is already a stressful process. “I think it’s hard in general, and I think this extra stress with COVID has made it harder,” said Olivia Grace Davidson, a Hammond senior who recently finished her applications. “I think that the stress is definitely still present, if not more, because of COVID, but I think that our college counselors have been pretty supportive.”

Berry also remarked on the competence of her college counselors, stating that despite the difficulty of the situation, “they’ve had a great response in general. We have such a good college admissions. They kind of know how to react and they know what’s best for their students.”